The Bombay High Court is one of the oldest High Courts of India. It is located in Mumbai, Maharashtra. Its jurisdiction covers the states of Maharashtra and Goa and the Union Territory of Dadra and Nagar Haveli and Daman and Diu. The High Court has regional branches at Nagpur and Aurangabad in Maharashtra and Panaji, the capital of Goa.

The High Court of Bombay, which is the chartered High Court and one of the oldest High Courts in the Country. It has Appellate Jurisdiction over the State of Maharashtra, Goa, Daman & Diu, and Dadra & Nagar Haveli. In addition to the Principal Seat at Bombay, it has benches at Aurangabad, Nagpur, Panaji (Goa). 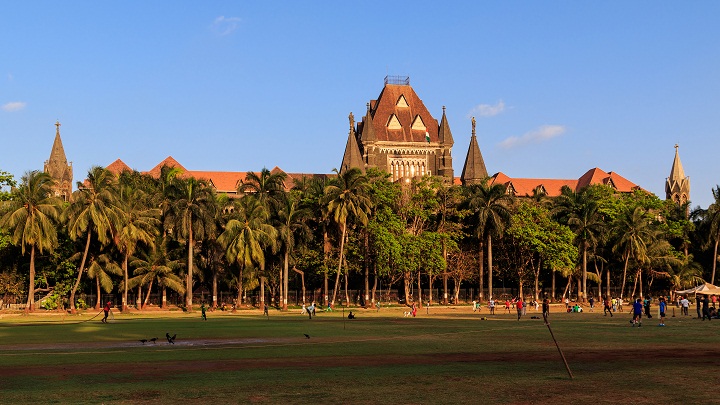 The Legal history of Bombay may be said to have begun in 1661, when it became a British possession. The Town and Island of Bombay was received by the British as a part of the dowry of the Portuguese Princess Catherine of Braganza, sister of Alphonso VI, the then Portuguese Monarch, when she married King Charles II . Bombay then was little more than a small fishing village consisting of a few straggling huts of Kolis, its indigenous inhabitants; and its harbour, destined in the course of years to develop into the greatest and most important commercial seaport in the East, sheltered only a few fishing boats. Charles II transferred it to the East India Company in 1668 for an insignificant annual rent of 10 Pounds

The remote ancestry of the High Court, though interesting is not quite inspiring, until we come to the Recorder’s Court established under the Charter of 1798. Confining ourselves to the British period- for there is no conceivable connection between our High Court today and such Courts of law as existed in the Portuguese, and still earlier Muslim eras- the judicial history of Bombay commences with the Charter of 1668 accompanying the transfer of Bombay from the Crown to the East India Company. In 1670, the administration of justice was in the hands of Justices who held their sittings in the Custom Houses of Bombay and Mahim. The system of 1670 was very elementary and suffered from several drawbacks and the judicial system was too much identified with the executive government of the Island.

The main architect of the Judicial system during this period was Gerald Aungier, the Governor of Surat Factory. He has been described as the “true founder” of Bombay. He was a man with liberal ideas and believed in an impartial administration of justice without fear or favor. But he was conscious of these defects and he was himself dissatisfied with the judicial machinery. Aungier was advised by the Company to select someone knowing something of law from amongst the Company’s servants in India. Aungier chose George Wilcox as the Judge and the First British Court of Justice was inaugurated in Bombay in 1672 with due pomp and ceremony. Fawcett quotes a detailed description of the opening ceremony on 8th August 1672.

When it comes to the selection process, the candidates have to take up a written exam / Interview. Selected candidates will be paid a handsome salary (as per Govt rules). The type of questions that are asked in the technical interview round differs from one position to another. There are multiple steps for the selection process for the posts of Stenographer, Clerk, Peon, Process Server, Gardner, Chowkidar, Liftman, Sweeper, Watchman, Chauffeur, Cook, etc. in the Bombay High Court. The procedure is as follows

We advise you for other Bombay High Court Recruitment 2021 and selection process please read below official recruitment notification carefully before apply.

Know the current status of your case by Return SMS

Important: Case Number Record (CNR) is a unique Identity Number of each case, which remains constant. All the Advocates, Litigants, and stakeholders are requested to ascertain the CNR of their respective cases from the concerned Courts and to refer the same for all future references.